Everything about this wedding dignified love. This wedding was especially close to my heart as Kay and I knew each other years before I got the honor to style his and Nadias’ wedding with my florals. When two cultures meet, it is not only about love, its about the ‘meet’ of two entire entities together. Its the fusion of cultures, food, ideas, moments. Nadias’ background  belongs to a Pakistani culture, purely rich with loud bold colors, rich in culture food and Kay belongs to a Sri Lankan background where beauty in culture and country is most famous. So what would you expect, that’s right, a splash of reds and oranges. They had the typical mehndi ceremony where the bridal party was adorned with gajras that flirted on their arms playfully, making the bellas look all the more gorgeous. 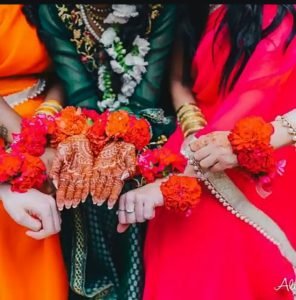 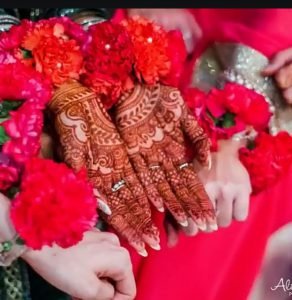 Nadia was super clear on the kind of look she wanted for her mehndi, the colors, the florals etc. And as per tradition, she also went for a head piece that would adorn her long mane, the head piece was made with spray carnations and carnation buds that was wrapped around her hair. OMG isn’t she gorgeous!! 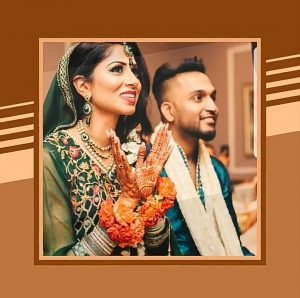 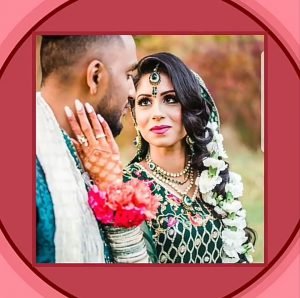 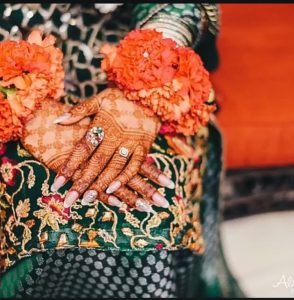 Be prepared to be wowed with a completely different color palette, as they both went for softer hues of ivory, purple and lavender. Her lehenga ( traditional gown) was shades of the same color palette while Kay wore a lavender color ajrak (traditional cloth) around his neck. Guess you all already know what the focal flower for this wedding was, you guessed it right!! it was both Calla Lillie’s and Dahlias. If we notice her bouquet it is more of a structured round look without any cascade and then we have collared the bouquet with burgundy tea leaves.  Don’t they look gorgeous together !!. As usual it is time to talk about some fun facts on any one flower used in  the whole ceremony and today let us talk about the flower Dahlia. Dahlia is a favorite amongst many women, and is very widely used by the dreamy eyed brides :), here are some fun facts abo

Facts About Dahlias…
The dahlia is named after Swedish 18th-century botanist Anders Dahl.
The dahlia is the official flower of the city of Seattle.
The dahlia originated in Central American in the 16th century.
Spanish Botanists discovered it growing wild on the sandy hillsides of Mexico.
The first tubers arrived in Europe at the end of the 18th century, sent over to Madrid by the Spanish settlers in Mexico.
Andreas Dahl (after whom the plant is named) regarded it as a vegetable rather than a garden flower, but interest switched from the edible tubers to the blooms when the first varieties with large, double flowers were bred in Belgium in 1815. (SOURCE GOOGLE)